Porcelain: From Chinese Emperors to the Runway (English)

A recent trip to Amsterdam and a visit to the breathtaking Rijksmuseum, caused me to reminisce about a fashion history blogpost I posted on May of last year (2013), in which I explored the creation of beautiful porcelain and the impact it had on fashion trends back in 2013. I therefore decided to translate that post to English (as it was originally posted in Hebrew) as well as add some updates to show you that the ancient art of porcelain making is still prevalent in this year's fashion trends.

For most of us, fine porcelain dishes mean only one thing- the vintage display cabinets in grandma's living room (those of us with Jewish grandmothers anyway...), and they are often related to tales of age-old dowaries and inheritances. Yet  the delicate icy-blue ornaments on porcelian dishes seem to be just the right touch of oriental inspiration that modern-day fashion designers are looking for. 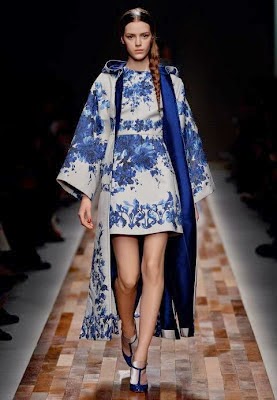 While we may believe that fine porcelain (or as we tend to call it: "China") is only something we whip out of the back of our kitchen cabinates once a year to impress friends we hadn't seen in years, in actuality- porcelain has been around for over 2000 years. It was first created- as its nickname suggests- in  the city of Jingdzhen, in North-East China; a city still known as the "capital of porcelain". In fact, decorating porcelain was considered such a fine art in those days, that the artists who specialized in it became protoges of the Chinese emperors from both the Shang and Han dynasties. Traditionally, white porcelain was adorned with elegant, thin, hand-painted depictions of various Asian flowers; and the Cobalt Oxide that was used to create the blue paint was so rare, that it had to be especially imported from Persia for the purpose of this rare craft. 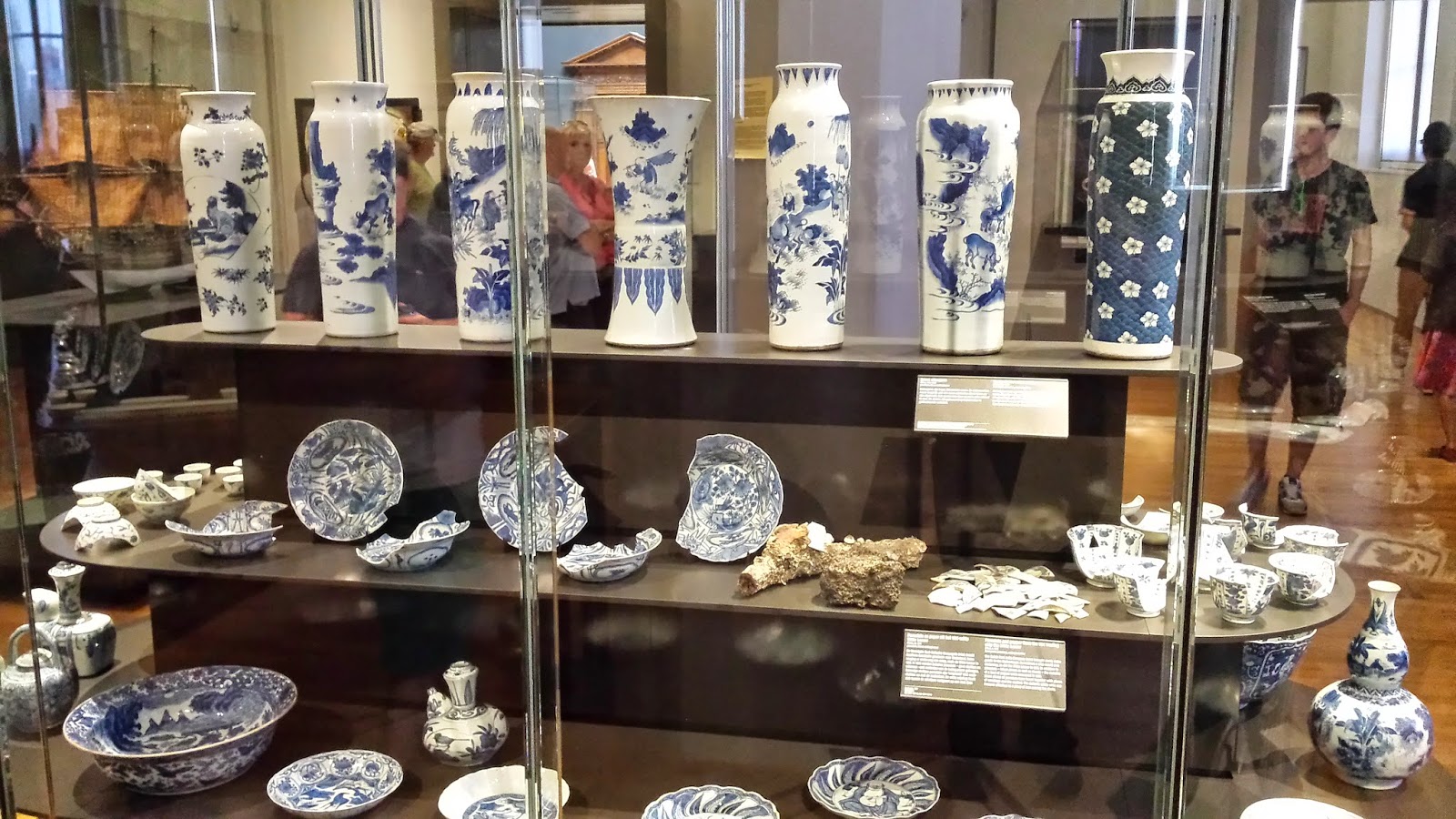 Traditional blue and white Chinese porcelain, transported to the Netherlands during the 17th century by the Dutch East India Shipping Company. A photo I took during a visit to the Rijkmuseum, Amsterdam.

The Chinese emperors were so enchanted by the crisp porcelain dishes, that in 583 A.C. emperor Chan ordered porcelain pillars to be built for his palace... I guess he never heard of what happens to people who live in glass houses. And several years later, emperor Yan damanded to have porcelain  statues of a lion and an elephant sculpted for his palace- Not quite my taste in decor, but different strokes I guess...

Throughout the 14th century, following an era of economic prosperity in eastern China, porcelain began to be massively manufactured. However, its blue decorative color enraged the emperors of the famous Ming dynasty (you know, the ones with the vases...), who declared that the Persian origin of the color was brining in unwanted foreign influences into China. Maybe the imperial families of that time lacked a sense of humor, but they were so furious that  they actually banned blue paint in China for a period of time (!!!), and local artists were left with no choice but to adorn porcelain dishes with black coloring. 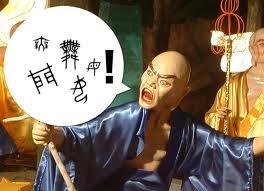 "Get this blue off of me!!!"
Chinese emperors in the 14th century banned the use of blue coloring

Following the rediscovery of China by European merchants in the 16th century (who were trying to follow Marco Polo's trail 300 years after he first discovered the orient), China and the "magic of the orient" became the main target for western explorers and merchants. By the 17th century, China also became a desired destination for Imperialist ships sailing from the Netherlands, England, Portugal and France. 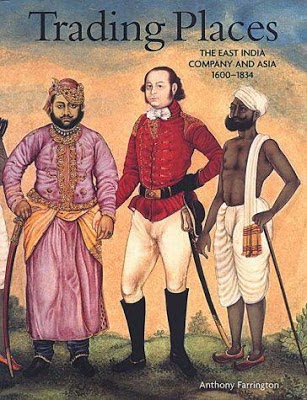 The East India Shipping Company arriving in the Hindu-China region in the 17th century.

Imperialism was the driving force of the 17th century, and European traders were crossing continents in the name of imperialistic expansion. And no trading company was more advanced or powerful than the trans-European "East India Shipping Company", whose employees  transported spices and fragrances from India, practiced the horrific export of human cargo out of Africa, and seemed to be utterly fascinated with the marvelous silks and delicate porcelain dishes manufactured in China. 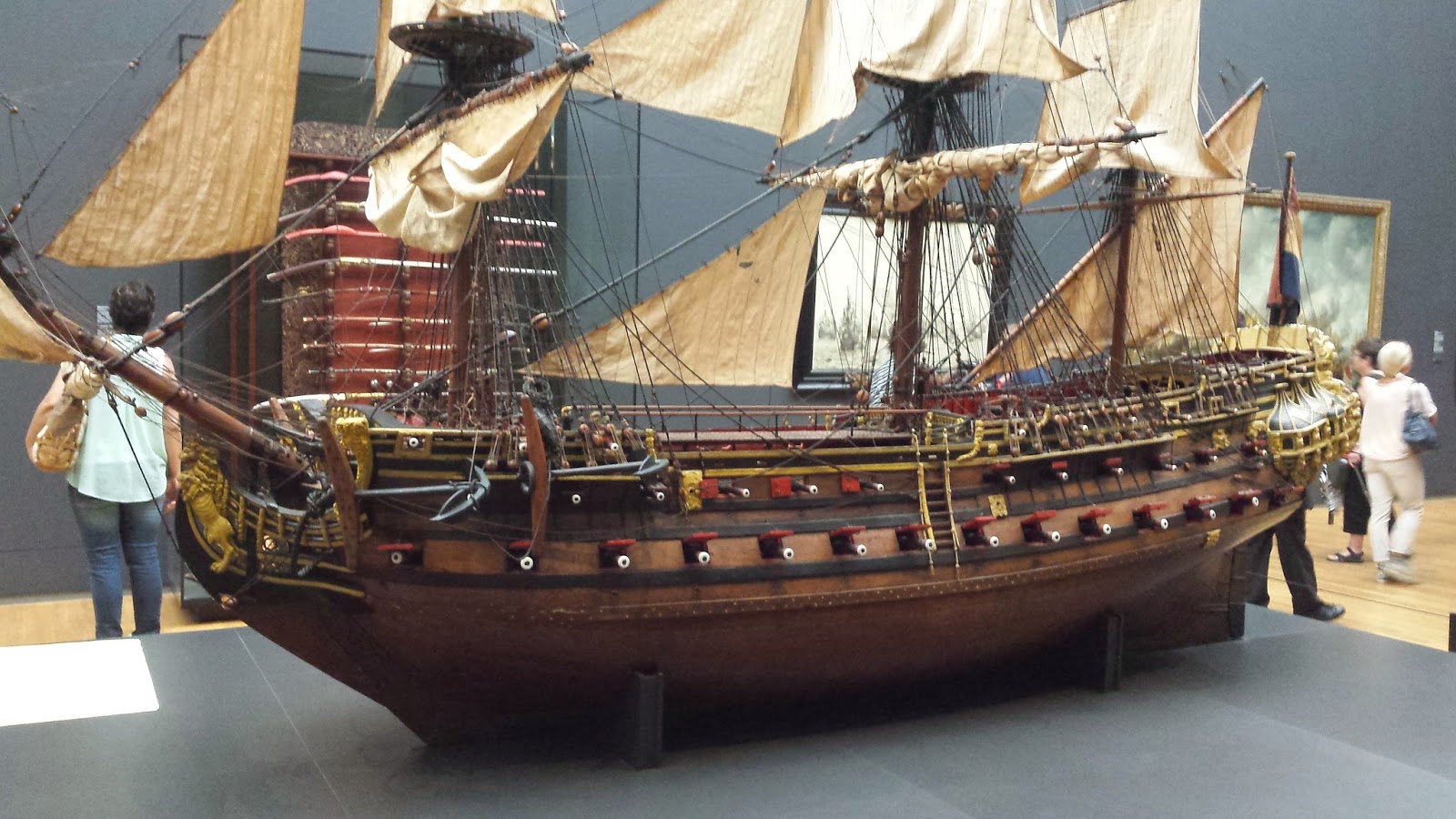 A model of the Dutch East-India ship, on display at the Rijksmuseum, Amsterdam.

From the moment the fine dishes arrived in Europe, porcelain became the hottest trend among European artistocracy. And just like any modern-day trend, royals and aristocrats from all over Europe flocked to order porcelain dishes decorated with their family emblem (imagine the  Gucci crocodile shoulderbag with your initials carved in it...). By the mid 18th century, the precious artifacts were so popular in Europe that they eventually found their way to the upper and even lower middle classes, who (much like we all do today) strove to resemble their idols in any way they could  afford (or forge). And so, the oriental flower ornaments were quickly replaced by images of Europe's economic elite frolicking in their English gardens. Yes, Europe enthusiastically embraced porcelain. And as time went by, Holland became a porcelain manufacturer in its own right; so much so that nowadays, the title of "Porcelain capital" is often atributed not to the Chinese city of Jingdzhen, but rather to the upscale Czech resort town of Karlovy Vary. Every year in early May, Karlovy Vary hosts the Annual Porcelain Festival in the lobby of one of the world's most luxurious hotels: Grandhotel Pupp.

From farway China, through to the days of Imperialist conquests, porcelain has come a long way to become a modern-day star of the world's fashion runways. In late 2013, the gentle swirly lines of blue and black oriental vegetations were all the rage in Europe's and New-York's fashion weeks. One outstanding example was the 2013 Sprin/Summer show of American Haute Couture designer Monique Lhullier. 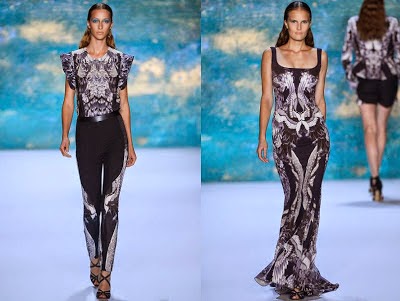 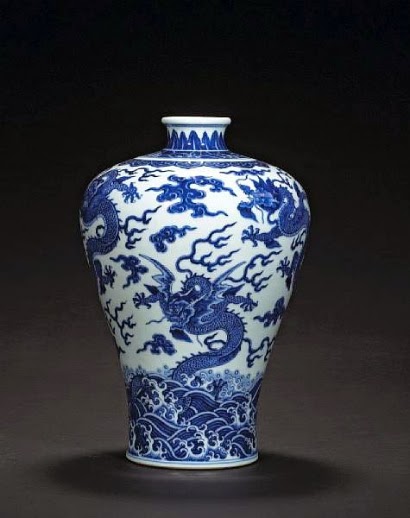 This American designer of French and Filipino descent, who is mostly known for her breathtaking bridal and eveningwear collections, seemed to be inspired by ancient Chinese porcelain prints, as the models in her Spring/Summer 2013 show walked down the runway dressed in  gowns and pantsuits of deep blue and light gray that resembled the Cobalt Oxide origin of traditional Chinese porcelain coloring. 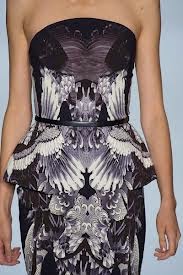 Soon after that show, the Roberto Cavalli fashion house also presented another, more ready-to-wear collection named "Just Cavalli." Once again the Italian fashion house drew its inspiration from the Far East, as the prints on the designes seemed as though they were drawn in water colors like an ancient Chinese painting.

And of course, we cannot talk about European nobility without mentioning the Venezuelan born designer Carolina Herrera, whose husband Reinaldo Herrera inherited the Spanish title of  5th Marques of Torre Casa. In 2013 Carolina Herrera harnessed the elegant aristocratic appeal of porcelain to create an unequivically regal line of eveningwear. 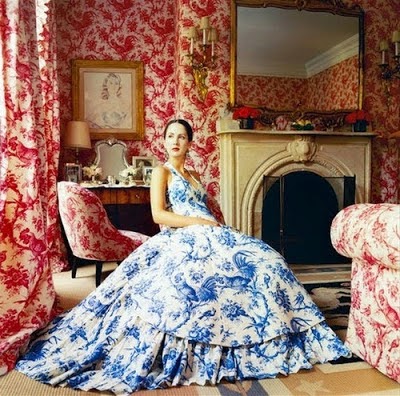 This gentle and aristocratic trend indeed became prevalent in the 2013 shows. However, visionary  designers have been displaying pieces decorated with porcelain-inspired prints for years. One such brilliant designer is John Galliano, who prior to being fired from the house of Dior for his antisemetic tirade (and personally breaking my heart...) had to foresight to present blue porcelain-like flower prints on snow-white dresses back in 2009 for his Spring/Summer show. 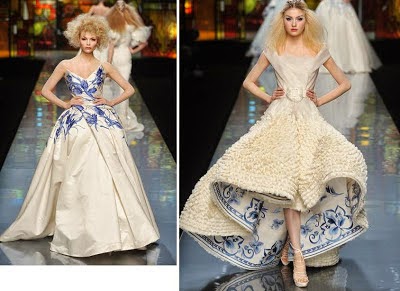 He did it before it was cool: John Galliano does floral blue and white porcelain prints for Dior 2009

That icy-cold mysterious appeal that one senses when looking at a white porcelain dish is perfect for this upcoming winter and the whole Fantasyland, Winter Wonderland trend that is currently being embraced by designers, due to the success of such fantasy movies as "Maleficent" and "Frozen". And this too seems to have been predicted by another visionary designer- Valentino, who paraded Princess Elsa look-a-like models in his Fall/Winter 2014 collection. All the designs created by the Valentino fashion house, known for its feminine romantic styles,  emenated the icy fregility of porcelain colors. 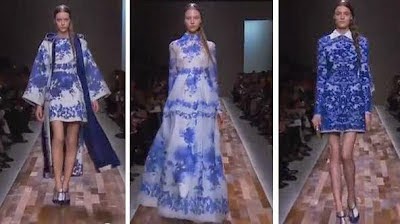 Models at the Valentino Fall/Winter 2014 show, all looking like snow flakes.

But there's no need to travel as far as North-East China or try to get an invitation to one of Europe's most exclusive fashion shows to embrace this highly feminine and ethereal style. Even in my native region- The Mediterranean, an aspiring fashionista could easily find some exceptional porcelain-inspired creations. Here in Israel, one designer who stands out in her one-of-a-kind creations is Dafna Levinson (www.dephnalevinson.com). In last year's collection, Levinson included an array of white jackets and pantsuits decorated with blue porcelain-like prints, as well as sleeveless tops decorated with oriental inspired flower prints that seem as though they were hand painted by a Chinese master painter. 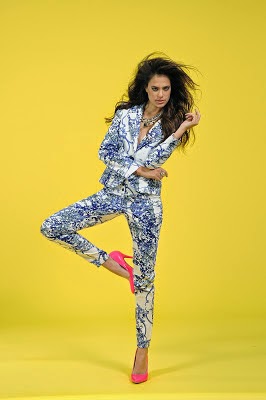 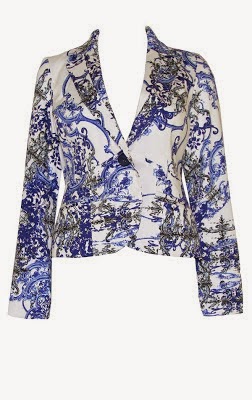 And if you think that simply because this is a revision of last year's trend then it must be a fashion has-been- well, just take a look at some examples from Vivian Tam's 2015 ready-to-wear show from the recent NY Fashion Week... Yep, porcelain is here to stay! 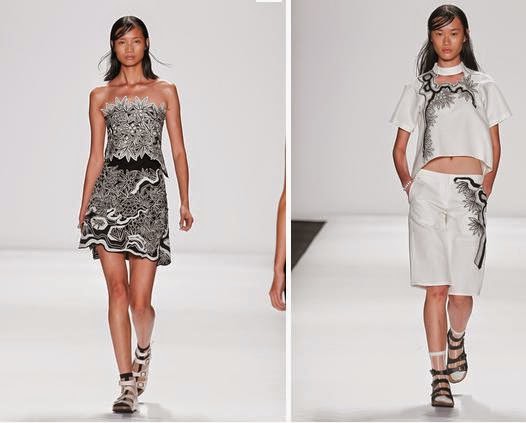 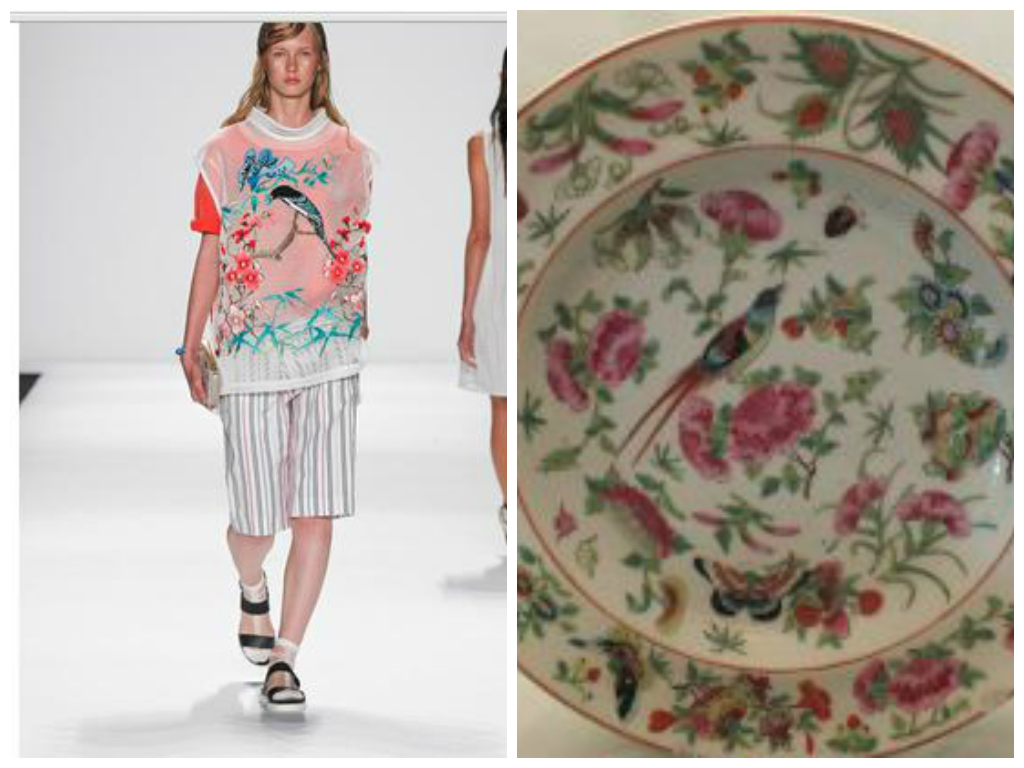 The metamorphosis of porcelain from ancient Chinese art to a status symbol for European aristocracy to a modern-day fashion trend, provides this timeless piece of craftsmanship with the perfect combination of oriental charm and European sophistication. So whether you are a fan of Chinese art or just an avid viewer of fantasy movies, this trend has everything you could ask for. And I believe that what has lasted for over 2000 would surely continue to fascinat the fashion world for at least a few more seasons to come.
פורסם על ידי אריאלה ב- 10:46 אין תגובות: